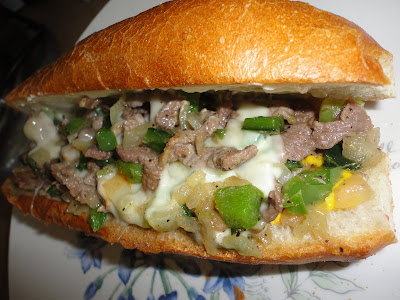 If you're looking for a delicious sandwich for those cold days lunch or dinner.  Here I have a recipe that you would certainly enjoy.  A little twist to one of the fave classics.  Philly Cheese Steak Sandwich.

I saw the recipe originally on one of the Throwdown episodes and decided to give it a try.  I was not mistaken.  This is delicious! It looks like a long prep but I promise, if you plan ahead, or even make the mushrooms, onions and peppers in advance, you'll be enjoying this jewel in a very short time!

Place steak in freezer for 30 to 45 minutes; this makes it easier to slice the meat. Remove the meat from the freezer and slice very thinly.
Heat griddle or grill pan over high heat. Brush steak slices with oil and season with salt and pepper. Cook for 45 to 60 seconds per side.


Place several slices of the meat on the bottom half of the roll, spoon some of the cheese sauce over the meat, and top with the mushrooms, onions, and peppers.

- For the Provolone Sauce:

1 tablespoon unsalted butter
1 tablespoon all-purpose flour
2 cups whole milk, heated
1 cup grated aged provolone cheese
1/4 cup grated Parmigiano-Reggiano
1 teaspoon kosher salt
1/4 teaspoon freshly ground black pepper
Melt butter in a medium saucepan over medium heat. Whisk in the flour and cook for 1 minute. Slowly whisk in the warm milk, and cook, whisking constantly until thickened, about 4 to 5 minutes. Remove the mixture from the heat and whisk in the provolone and Parmesan until combined; season with the salt and pepper.

- For the Sauteed Mushrooms:

- For the Caramelized Onions:

- For the Sauteed Peppers: